On Build Systems, Visual Aesthetic, and Other Terrors

First of all, sorry for the stupid title. A coworker and friend of mine realized that our progress on our personal projects has been abysmal. Said coworker came up with a challenge to exchange one .gif every Friday showing the progress we made on our games. Gifs are more exciting than screenshots (a la reddit /r/gamedev's Screenshot Saturday), which makes the challenge more exciting.

Anyways, here is my .gif for the very first week.

It's pretty shitty, but an important submission nonetheless. This is me dropping an Unreal Actor into the editor. This runs my own C++ code which uses PolyVox to generate a 3D voxel mesh.

Yes, I've decided to go with 3D voxel, which brings us to the first part of this post: Visuals.

Now, one thing that I've been struggling with since Galavant's inception (as Horizon), is what Galavant will look like visually. 2D, 3D, top down, first person, parallel, isometric, and the list goes on.

I think I've made up my mind to use 3D top down voxels with Marching Cubes. Because the view is top down, I don't have to go to any extents to make LOD or far views possible. Top down should have less demand for high performance as a result of this. I don't want the rendering to take too much time because I want to focus on simulation.

I am using voxels because building and a large procedural world are essential to my vision for Galavant. Marching Cubes is an algorithm that generates a smooth mesh for voxels. I don't want my game to look like Minecraft, especially because of the amount of terrible games that have the same aesthetic.

Because of my unique view, I have done some research to find games that employ a similar style. I'm going to dump it here so you can get some idea of what I might be going for.

This video showcases the 3D top-down perspective with voxels.

I also plan on having a similar technique of fading the roof/things blocking the player once they go indoors. Note that I'm not going for the blocky look (at least, not for terrain).

I think the controls in Galavant will be twin-stick style, like the .gif above.

Here's a 3D top-down game which almost exclusively uses billboarding (which I like). Another top down 3D voxel game (remember, I'm not going for the blocky look for organic things): An example of a pretty 3D top-down shooter:

I'm not going for a photorealistic look like this game, although I am going for smooth terrain plus voxel building.

Another 3D top down voxel game.

This is a really interesting voxel game:

What's interesting about this is that I believe they are using Marching Cubes, but in order to get the blocky look as well as nice slopes, everything you place is actually four voxels rather than one. I think I will likely do something very similar for Galavant. They go a little overboard, but I do like their post processing shaders. I don't think I could manage their hi-fi textures, though.

It's also interesting how they add a bit of noise at mesh generation level so that the world isn't a perfect grid. It gives it a Sly Cooper-type look to it that I like.

I like the overall aesthetic of this, although it's a little too indie/artsy for Galavant:

Steven's Sausage Roll has a 3D top down view with blocky, noisy tiles: 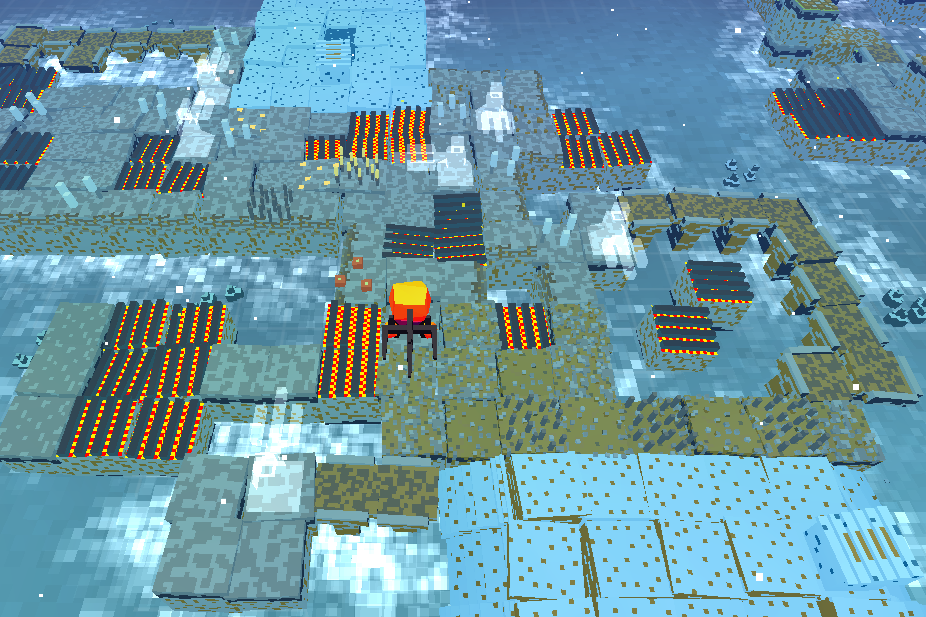 I do like the vignetting; it's a little too heavy in these screenshots, but I still want some in Galavant.

If you guys actually read and enjoy my posts, I know you like the dirty technical details.

I've decided to use Unreal as a frontend (more on that later) because I believe it has the least amount of effort to go from zero to triangles on the screen. I likely will not be using Unreal's physics, logic, etc. I learned about how to link external libraries in Unreal's build system, which was a massive pain in the ass, both because the documentation is lacking, and because I'm on Ubuntu (mostly undocumented). Galavant is going to be an external library, so this is important to know how to do.

Frontend/Backend: The Grand Construction of Galavant

I plan on using a somewhat novel project construction for Galavant. It's important to me to have Galavant available for as many platforms as possible. In order to accomplish this, Galavant itself is going to be a platform independent library. This library (called the "backend") references wrapper functions for everything from threading to sound and graphics. The "frontend" must provide all of these wrapper functions with implementations.

I plan on using Unreal as the first frontend for Galavant, but I am going to make it as easy and as straightforward as possible to make new frontends.

Another thing I've struggled with is the build system. Previously, makefiles were my go-to on both Horizon and Base2.0. If you read Horizon's and Base2.0's makefiles, you'll see they sucked. A lot. Now, to be fair, I was somewhat using them incorrectly because I couldn't figure out how to automatically generate dependencies.

Late in Horizon's life, I decided to switch over to using Code::Blocks project files to build Horizon. However, I cannot stand doing text editing in Code::Blocks (Sublime Text is simply too good), and adding files is painful. Sublime Text has a mechanism to add Build Systems, which is awesome, powerful, and customizable, but requires a makefile-like thing to actually do the work.

I asked my coworkers what they recommended, and Jam came up. The side-by-side comparison on the introduction page between Jamfiles and Makefiles instantly sold me on Jam. They're platform agnostic, simple, and straightforward. Within a couple of hours, I got them working on a few of my test projects in Galavant, and I've been won over.

The Near (-ish) Future

For the near future of Galavant I will be working on the lowest of the low - getting a solid build system workflow set up, creating the abstraction layer for threading, debugging, performance, and other essential features, and thinking more about how to proceed with the large scale engine design. I will likely also be experimenting with Unreal on the side.

You can check out my Twitch.tv channel for past dev live stream shit if I remember to turn it on here and there. My last broadcast showed me experimenting with voxels in Unreal.

That's all for now; hopefully, I didn't bore you to death.